5 gifts to make your workforce feel valued this Christmas 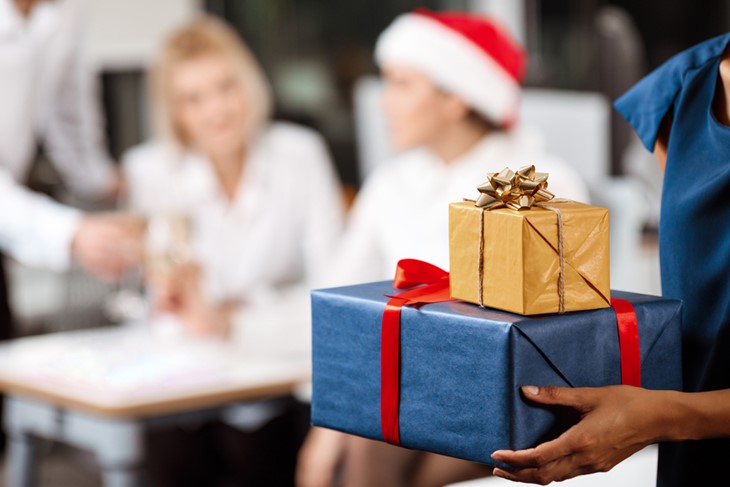 But could the season of goodwill and cheer actually spell danger for keeping your workforce?

Research published in September 2017 by the ADP Research Institute showed that UK employees are the most likely in Europe to leave their current job.

Its survey results brought the shocking find that 70% are open to quitting, compared to 60% of European workers. Plus, 62% of workers in this country say they don’t feel valued - compared to 44% of German employees.

And with a clean start in January round the corner, the run up to Christmas can be a classic time to reassess and start to think about finding another job if they’re feeling unhappy.

So don’t let the season of goodwill and cheer turn into a recruitment crisis for your business. Here are some Christmas gifts to help your team feel valued and rewarded in the run up to the festive break.

Whether it’s children’s nativity plays to get to or parties to attend, there are lots of demands on staff in the run up to the festive season.

Offering flexible hours for December will make this juggle easier. That might mean a chance to come or leave earlier or later for anyone who’s bleary eyed after the work Christmas do. Or perhaps days working from home once the kids break up from school. Depending on your business, as long as the work gets done it may not matter when or even where that happens.

Recognising that December isn’t just about work - but a large chunk of life too - will be appreciated and is a way to keep your team happy and motivated safe into the new year.

Give a shopping afternoon

Chances are, many of your staff will have a browser tab permanently open on Amazon from the start of December. And who hasn’t returned late from lunch because they’ve been battling their way through crowds on the high street?

Offering staff dedicated shopping time might be a way forward. Perhaps consider a ‘free’ morning or afternoon off (that doesn’t come out of annual leave entitlement) to hit the high street when it’s quieter, or to browse gifts online with a clear conscience.

They key? It’s to acknowledge that shopping happens, and account for it so the time your staff are at work they’re better focused on their jobs.

Think it’s not important to thank someone for doing their job? Research out in May 2017 suggested that managers don’t thank employees nearly enough. Nearly two thirds of workers polled felt their motivation and morale would get a boost if their good work was noticed - and thanked.

And this goes double for the end of year at Christmas, too. Whether it’s in-person praise, a company-wide email expressing appreciation to individuals, or even a personal thank-you note listing their accomplishments that year, commending people for good work is a simple way to keep morale high.

But if your business just isn’t in the position to give out significant festival financial perks, there are alternatives. We’ve talked before about how if you can’t give a pay rise to employees, it’s worth coming up with extra perks instead so you can keep staff happy and engaged. Similarly, during the festive season, think about how you can keep staff motivated with something different.

Perhaps give them the choice about what they’d like. For example, a company party or cash equivalent? A team activity day somewhere fun, or a nice dinner out? Deciding on treats together can give employees a sense of ownership in the run up to Christmas.

Give some time in January

Of course, making staff feel valued in December is important. But so is how you as an employer motivate them long-term. Before they go off for their Christmas break, how about scheduling in a time in the early New Year to discuss their professional development needs?

At HR GO, one of the things that candidates who want to switch roles consistently tell us is that they want to feel they’re being invested in and helped to reach the next level in their career.

Letting your team know that you’re taking their development seriously will help them face the New Year with optimism and a renewed vigour. Plus, of course, it will give them less reason to spend the Christmas break considering a role change.

But give throughout the year, too

If your employees feel valued and appreciated, they’ll be happier in their roles and more likely to go above and beyond for your business. And while this is important in December, it’s just as much the case for the rest of the year.

Making a habit of rewarding your team in little ways can reap dividends, long after the tinsel’s come down and festive jumpers packed away for another year.

Night shifts: Can you make them better for workers?

Reducing the risks that come with anti-social working hours

Why someone else got your dream job

Reasons why another candidate beat you

Your new career must-have? A mentor

Why finding a mentor can boost your job prospects