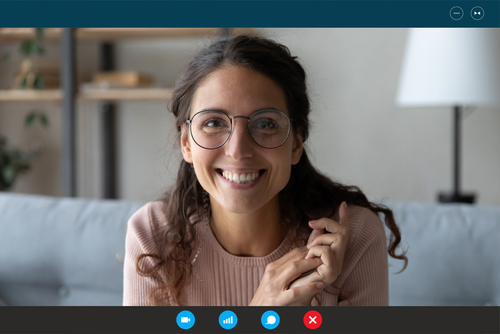 6 video interview warning signs to spot the clues that an employer is not for you.

Interviews are a chance for you to gage whether a potential employer is right for you - as well as the other way round.

If you’re desperate to get into work - or leave a job you’re miserable at - you might be tempted to take the first offer that comes along. But even in a tough job climate our advice is to pay attention to any warning signs of a bad boss or dysfunctional workplace when you’re being interviewed for a new role.

An interview is a time when an employer should be trying to show themselves and their organisation in its best light - and any negatives will be amplified tenfold if when you do start work.

Let’s have a look at 6 video interview warning signs that should set alarm bells ringing - even over video.

Back when in-person interviews were standard, one sign of a rude interviewer was if they kept you waiting in the reception area longer than was polite. Fast forward to the time of video and the same is true - but now you’ll be waiting to be let into a virtual meeting.

Of course, normal delays happen during the working day. But if an interviewer shows up significantly late (we’re talking 15-20 minutes or more) without messaging you to say why - and then doesn’t apologise for this or seem to acknowledge how disruptive this could be for you, it’s bad news.

At HR GO we urge candidates not to ignore signs that a potential employer doesn’t respect you or the time you’ve given them.

2. They haven’t read your CV

“Prepare, prepare, prepare”. Any job hunter knows that to be crucial pre-interview advice. So how should you feel if it’s clear your interviewer hasn’t prepared as much as you? Maybe they mention not having read your CV before the call. Or they bluff it and end up asking questions that make it obvious they’re new to your work history. Either way, a lack of prep shows a lack of respect and is an important video interview warning sign.

When you’re going for a role you want the person judging you as a candidate to completely focus on one thing - you. After all, you’ll have put in the time and preparation and be doing all you can to impress during a video interview.

So what if their eyes keep darting away from the screen to check their phone? Or they’re typing a reply to an email? Or worse still, they take another call? All these are red flags that they’re just not that interested in you as a candidate - and so are likely to be just as disrespectful to you as an employee.

We urge every candidate we work with at HR GO to prepare some smart questions to ask at interview - whether that’s about the role or the company.

Knowing as much as possible about your role is crucial before you start working somewhere, so you may want to find out more about:

But what if these kinds of questions are met with vague and woolly answers? For the person interviewing you not to be able to share this information doesn’t bode well for a clear future working relationship.

5. They gossip about people

Some interviewers might gossip about current employees - or worse still, badmouth former team members - an overt video interview warning sign. Perhaps the person you’ll be replacing left them in the lurch when they quit the role or ended their employment on bad terms.

Sharing views on the person who was in the role before you is just unprofessional. Wouldn’t you rather work for someone who debriefs on personnel matters privately and discreetly?

6. You just have a feeling

Perhaps these red flags back up things you’d noticed before the interview. For example, you’ve spotted some negative employer reviews on Glassdoor, or realise that this role has been advertised a few times already in the past year (indicating a high turnover).

Finding a job includes finding somewhere you feel welcomed and supported - and so it’s crucial to listen to your gut instinct and investigate your feelings. It’s far better to realise you’re a wrong fit earlier on than end up working with someone who’ll make you miserable later.

Find extra tips and tricks on acing your next interview. You can also take our quiz on ‘How ready are you for your job interview?’ at the bottom of the page.

Are your female employees in a ‘she-cession’?

Coronavirus equality: how to support women in your workforce

If you're new to the job market, the pandemic's unusual conditions will have made your work experience out of the ordinary. It might seem like this could have a negative impact on your CV, but here are some ways you can turn that into positives.

What to look for in job candidates that shows their level of emotional intelligence.